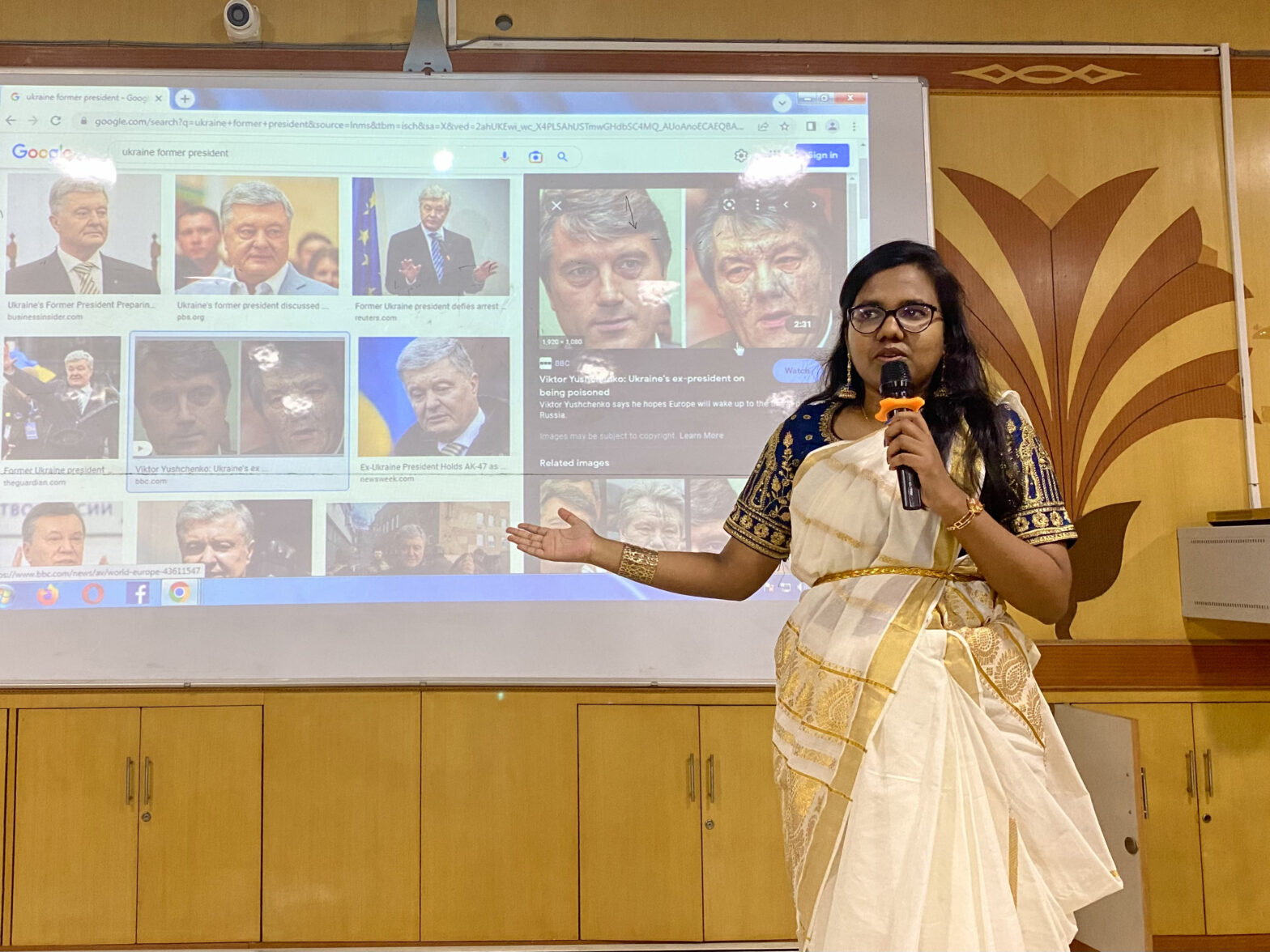 English Online student, Dosita, talks you through her advice (based on experience) on public speaking in English in her winning blog.

In the words of John F.Kennedy, “Public speaking is the art of diluting a two minute idea with a two hour vocabulary”.

And, I agree. But he makes it sound easier than it actually is.

Have you ever pretended to be confident while giving a speech despite trembling hands and a spiked heart rate? Yes? I’ve been in a similar situation. Let me tell you about it.

It was a scalding July morning in Tamil Nadu. I came out of the house, looked up at the sky and prayed the sun wouldn’t make me sweat on this all important day.

I was neatly dressed with carefully braided hair. My thoughts ping ponged from the weather forecast to the subject of my upcoming speech. I hoped to outwit everyone with an intriguing topic.

I got into my car and waved goodbye to my parents whilst they wished me luck. I was worried about having to creep along for hours in bumper to bumper traffic. Thankfully, I reached my college after only an hour. An hour and a half later, I found myself walking on stage.

I was welcomed by a restless audience so I had to come in strong to make sure I captured their attention. I recollected the speech-giving tips gained from my English classes and decided to use them.

First, I introduced myself in a loud voice and made sure to enunciate. This might sound obvious, but it’s hard to do when you have 150 people all staring at you.

Then I asked a beguiling question.

I put up a picture of a famous person, described them, and asked the audience to guess who they were. Despite all my efforts to engage the audience, it all kind of backfired because no one identified the celebrity. I had to break the awkward silence so I gave them a hint. A few people suggested a few (wrong) names, so finally I revealed the answer to the difficult riddle.

The audience wondered why I’d shown them the Ukraine’s former president. My speech was about acne and the former Ukranian president suffered from one of it’s variants.

Unlike the other speakers, I was extremely anxious and my hands were trembling. I realised I had to conceal shaking like a leaf somehow, so I rested my hands on the table to prevent the audience from noticing.

I carried the audience through the presentation like a wave in the sea. I made eye contact all over the room. From time to time I adjusted my body position and used my hands to gesticulate. I focused on my tone and body language as well. At this point you should take notes. All these techniques will build a foundation for your speech and make you look confident.

Finally, to make sure my message had been delivered, I gave them a quiz. I put up pictures of famous people (like the actor who plays eleven from Stranger Things) and asked my audience to name the variants of acne that affects the people groups these celebrities represented. I even used 3D model animations!

Giving this speech helped me identify gaps in my subject knowledge and improve my speech giving skills.

In short, to give a great speech:

I hope my story has inspired you and will help you with future public speaking!