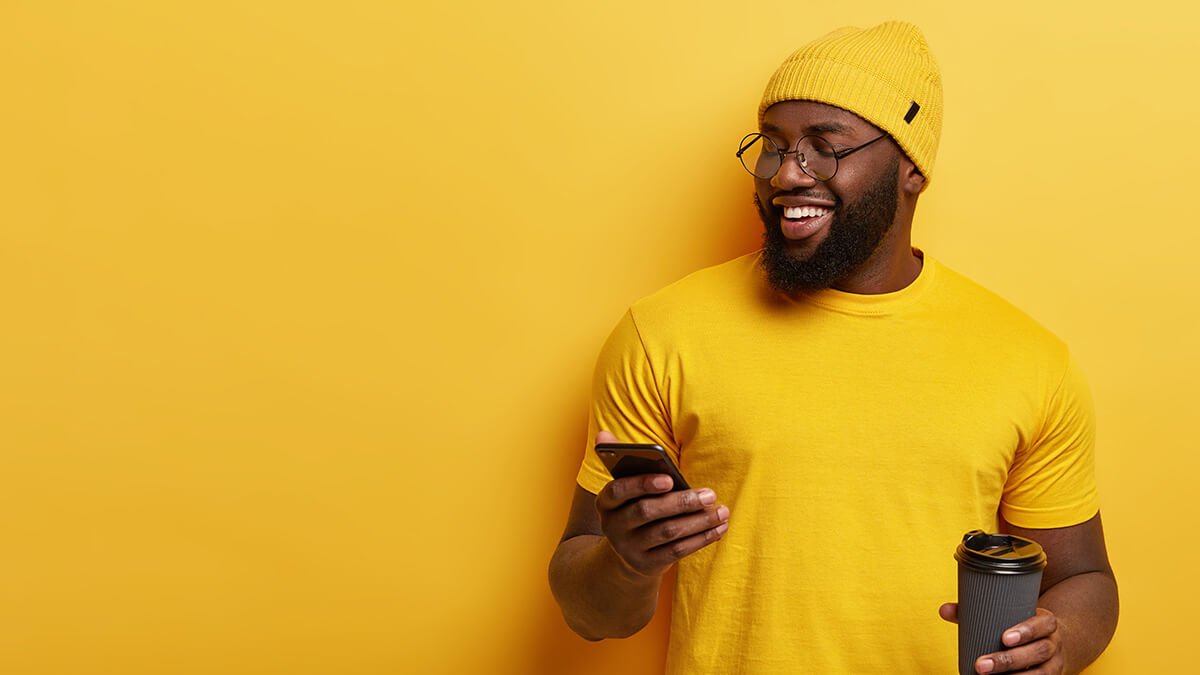 Everyone loves a good meme – and English language versions are popular across the world. They can be any combination of the political, topical, historical, surreal or anything else that makes people smile.

This is one of thousands of memes that rely on cultural references or ‘in-jokes’. The very best ones never remain the same: they are adopted and adapted by people over time.

If you make a meme using the format above, it’s known as ‘Drakeposting’. Both images originally came from the ‘Hotline Bling’ music video by Canadian rapper, Drake. The first image usually suggests the top caption is a really bad idea – Drake is pushing it away. The second image suggests that the bottom caption is a great idea – Drake is looking pleased. Here the joke is that people who don’t make the effort to learn English in class will happily learn English to understand memes.

‘Hold my beer’ memes are very common on English-speaking social media. The basic format is that someone says or does something outrageous. A second person then says, ‘hold my beer’, before doing or saying something even more outrageous. The idea is that the second person doesn’t spill their beer while behaving stupidly.

According to the Wall Street Journal, this kind of meme originates in jokes told about ‘Rednecks’, an offensive term used to describe unsophisticated working-class people in the southern states of the USA. As you can see, it’s a meme that is easy to adapt to any topic – even language learning.

Back in January 2020, country music legend Dolly Parton started a popular meme on Instagram and Twitter that became known as the ‘Dolly Parton Challenge’.

The joke was about how we try to make a different impression on different social networks. For example, many people want to look professional on LinkedIn, informal on Facebook, stylish on Instagram and attractive on dating app Tinder.

Immediately after Dolly’s post, lots of celebrities and other people took up the challenge and made their own versions – including lots that featured their pets. Like this one.

From then on, the meme got even funnier and more inventive. Here’s a good example: a witty adaptation of the cover of the Beatles’ album Let it Be.

These popular memes use historic paintings to make a joke. These are a few of our favourites.

This one makes fun of the stereotypical British habit of not complaining, no matter how bad things are. A sword through the neck? Nothing to worry about!

Wordplay is a common feature in this type of meme as well. Here’s a good example.

This one uses a painting of William Shakespeare and a picture of a pear to make a pun on his name – ‘William shakes pear’.

Finally, the San Antonio Museum of Art gives us a great example of how different types of memes can get mixed together!

These memes compare four different things. The easiest thing is represented by a fluffy cat. The next hardest by a powerful crocodile. Something even more difficult is represented by a terrifying dragon, while the hardest thing of all is shown by Chthulu, a fictional creature invented by the American writer H.P. Lovecraft.

This example is a joke based on how hard different languages are to learn (particularly for English speakers). Mastering Russian and its Cyrillic alphabet is a powerful achievement, but ‘casually ordering food in German’ suggests you have superpowers (English speakers often complain that German grammar is very hard to learn).

This is another meme that works by putting two contrasting pictures together – an angry woman and an intelligent-looking cat. It looks as though the woman is shouting at the cat and the cat is disagreeing.

The picture of the woman (Taylor Armstrong) is from an American TV series called Real Housewives of Beverly Hill. The cat is called Smudge – his Instagram account has 1.5 million followers!

In this example, the joke is based on the fact that many English speakers find it difficult to pronounce the word ‘specific’ – they say ‘pacific’ instead. The angry woman is telling the cat the correct way to say the word is ‘specific’. The cat simply doesn’t care and annoys the woman by saying the correct pronunciation is ‘pacific’.

As with so many successful memes, they change over time and get combined with other memes. Here’s a great example that pokes fun at the ways four different languages use the definite article. 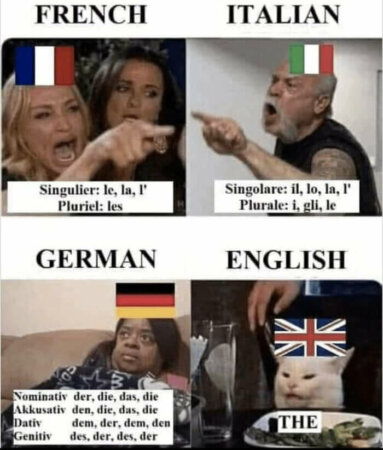 The angry woman (French) is shouting at the man (Italian). Both are claiming that the words for ‘the’ in each of their languages are the best ones. The woman (German) is looking puzzled at the complex case system the Germans use for the word ‘the’. The cat (English) is looking smug that there’s only one word for ‘the’ in English.

(By the way, we’ve got a helpful post on the definite article in English here).

Some of our favourite memes poke fun at the British. They often rely on stereotypes, like this one:

The British have a reputation for having really bad teeth. The joke here is that, thanks to the COVID-19 pandemic, British people can smile again – without people being able to see their terrible teeth.

We hope you’ve enjoyed our post on English language memes. Let’s go back to where we began – the Drake meme – and give it a truly British flavour.

Memes are great for practising your English, but if you really want to boost your language skills why not try live online classes with English Online? You’ll be amazed by the progress you make.