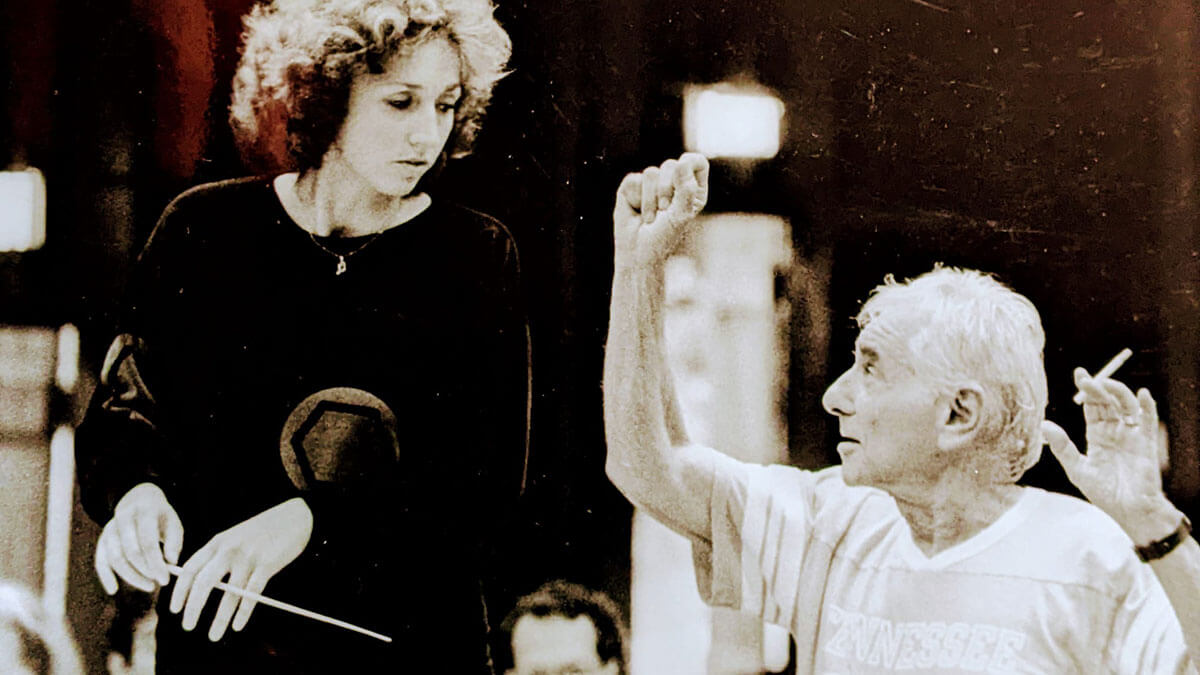 The years pass, but I’ll never forget the summer of 1986 in the Berkshires of Massachusetts:
great experiences and two words that changed my life.

I was 30 years old, a young woman, living in East Germany. The full name was “German Democratic Republic” (GDR), but I’m sure no one remembers it. It was where I lived and was born. At that time I couldn’t imagine going to Massachusetts one day.

We lived in one world, and there, around 10.000 kilometres away and separated by an ocean was Tanglewood, the famous music centre in the United States.

In 1985 I worked as a conductor and coach at the Landestheater Dessau.

It was a great year with a lot of work and two auditions. I conducted the first one in November, which was in Neubrandenburg. I had never heard the name of the city or the orchestra.

But I thought, why not?

I went to the north of the GDR, conducted, did a good job, and convinced the jury. Madness! But that wasn’t the end of the story.

In December I got an invitation to audition in Boston. Boston! I couldn’t believe it. But what could I do? I had no time, no money and couldn’t imagine how I was going to get to Boston to conduct.

Kurt Masur, the famous German conductor, was like a father figure to all young conductors in the GDR, and he helped me. Together with the managing director of Tanglewood, he took care of my travel, my visa and (yes!) he got me a plane ticket.

I got one of the four fellow positions in this summer of music.

It was an incredible summer in a beautiful landscape in the Berkshires.

I remember the moment when I conducted Haydn’s Symphony No. 102 in a concert with Lenny Bernstein, who led the Tanglewood Music Center Orchestra. The audience was thrilled, and from that moment on I was Stockbridge’s and Lennox’s “young lady from East Germany with the wonderful Haydn”.

The lessons were really great. Seiji Ozawa, the principal conductor of the Boston Symphony Orchestra, knew exactly how to explain to us the secrets of our profession.

At Tanglewood, I talked to young conductors who were at the beginning of their careers. From them, I learned that they did not yet have a permanent position, but worked as freelancers. I thought of my position as chief conductor in Neubrandenburg, where I could go in September, and I was proud of it. Nevertheless, life in America was colourful, relaxed and I could imagine living in America forever. But no, I couldn’t do it. The price was too high for me. My parents lived in Dresden and so did all my friends. If I left, I could never go back. Those were the laws in the GDR.

But working in America did seem like an exciting opportunity.

So I was very happy when Richard, the managing director of the Tanglewood Music Festival, asked me to audition to conduct in Baltimore. The principal conductor, David Zinman, sat at the celesta and smiled at me, so I thought I might get the job. After that audition, the people in charge spoke to me.

This is my language fail.

They offered me the position of Associate Conductor.

Or was it Assistant conductor? I didn’t know the difference! I couldn’t understand the words because I didn’t speak the language properly! So I returned to my home country without having the right information.

I called Kurt Masur and he told me that an associate conductor would be great. But an assistant one, no! Assistant conductors carried the score and sat in the audience. He said I would make a better choice if I start as chief conductor in Neubrandenburg, where I had successfully completed my audition six months before.

What would have happened if I had known the difference between “associate” and “assistant conductor”? My life would have been completely different. In what way? Who knows.

I was born in Dresden and studied conducting there. I’ve conducted a lot of orchestras such as Düsseldorf Symphony, Dresden Philharmonic and Leipziger Gewandthaus Orchestra.

Learning excellent English was a dream of mine. But time went by, I had too much work, and wasn’t able to put aside time to learn English. This year, I became a student of the British Council. It is wonderful to study here with unique teachers and young students from all over the world.